skip to main | skip to sidebar

3 subjects for black and white

Today (or tonite according to your GMT) I'd like to touch the black & white topic, by showing three personal ways of dealing with! I'll use three photos, of which the first was taken in Fukuoka in August 9, 2009, whereas the other two were taken here in Lisbon on February 9 (the umbrella) and yesterday the last one. The first and the last has been postproduced today, while the second one is a bit older (two days, maybe), and you can notice this difference on the editing.
They have very little in common. Apart for the black & white, I think that they belong to separate kind of photography.
Let's begin with the older one. I entitled it infanzia or childhood and I simply love it!
I love the shot - the inclination of the camera gives to the whole scene further movement that is enhanced by the playing children, although the young girl, with her position, seems to stop the other children and give me the chance to push the button! Therefore, the timing is another plus to the shot: they jump, they land, they run, they don't move and this presence of different movements is well conveyed by the editing, with its good contrast and clarity! 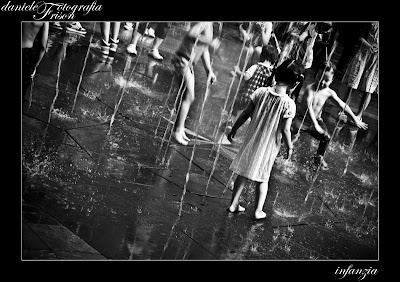 childhood
1/60 sec F/6.3 iso-100 67mm
The second pic I'm going to talk about is a photo that was born in my mind a long time ago, at least since the day I saw for the first time Lisbon under the rain, most precisely the day-after, when you find everywhere broken umbrellas. I has been thinking a lot about taking a series of photo of broken umbrella, but I never really started this portfolio. Some days ago, notwithstanding this lazyness, I found this thrown-away umbrella and fortunately I was carrying my camera with me. Moreover, the wall was almost completely uniform - except for some dirty spots - and there was this spotlight that helped me a lot to create a dramatic effect. In postproduction I turned the photo to b/w, added contrast (a lot of) and the vignetting and then I used the preset of Photoshop CS4, crossprocessing, over the black and white to enhance further the contrast and overlapped this level to the original by reducing it to the 50%, and that's were the green tone comes from. 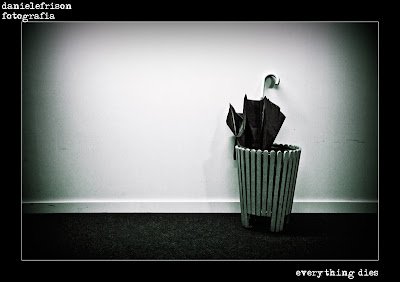 These are the days where you should open your mouth and scream a big F*CK OFF!!
Yes, today is one of these days (I'm listening to Pearl Jam, not to Pink Floyd.. they both begin by P and share the TWO WORDS name, but they're quite different).
By the way, today/tonite I'm not going to write something stupid about my photographs (I will do this tomorrow with a GREAT NEWS, but I'm not in the right mood tonite), rather I will write something about HER, i. e. about Martina, my future (I HOPE) wife.
After this weekend we spent together - we didn't see each other since a month - I stuck here with memories and a lot of days to go through all alone. Well, that sucks. I have a lot of work to do, I will take a lot of photographs and listen to tons of music - probably SAD and MELANCHOLIC music - just to pass the time and wait for her to come. I guess, this is a part of becoming adult. Should be amazing? Should be formative? Of course it is! Because if it's not I'm totally wasting my time, and I'm pretty sure I'm not taking it back!
I just need some space to say something about my condition, but when I decided to write something I was listening to a song I'd like to dedicate to Martina, even though she doesn't like it because it makes her sad. Nevermind, I love this one and I love her.

[from now on in english]

Yes, I know! It looks pretty strange to me, too! But in order to obtain comments also from non-italian speakers and to enhance my knowledge (big big words!) from this post on, I will write my "articles" in english!
Actually, that's really not a novelty for me, since each day I have to write down something in english.. one might just say that I'm carrying work home! But that's not exactly true. In one word, I have to be better than the way I am now.

"I see it around me, I see it in everything / I can be so much more than this"
[Jimmy Eat World - My Sundown]

By the way, the language change won't make the topics change as well! Then, tonite I'm going to talk about a photograph of mine (really?), yes, really! 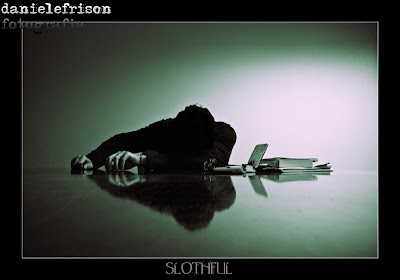 I took this one because of a photographic contest. There is this amazing italian website www.fotocontest.it , which is not the "classic" photo-sharing website, rather it is born only to propose photographic contests! It's quite amusing, really! The latest contest is, as you may already have guessed, Concorso #109 - I sette vizi capitali or the seven deadly sins!

I was undecided between anger and sloth but, finally, because of lack of time and space I decided to portrait the latter.

Despite the background of the shot may look like a studio, I took this pic next to the Centro de História de Além-Mar (CHAM), or the place where I "work". By the way, the background fits so well with the idea of the photograph that I can be satisfied with that.
Now, the heavy question: does this photo represent well slothful?
Actually and obviously, in my humble opion it does!
I sought for a definition of sloth that wasn't full of Christian philosophy and I did find one which basically states that the word sloth means "the indifference about everything. Besides, it designates the dejection, the boredom and the tiredness of the human being in front of life".
Then this idea came to my mind. A figure possibly the most anonymous it can - clothes, too - who can't barely see or touch things concerning daily and wordly life, such as his agenda, a newspaper, a book and his mobile. 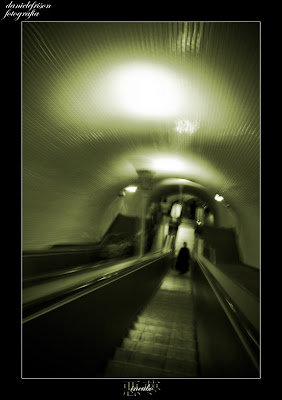 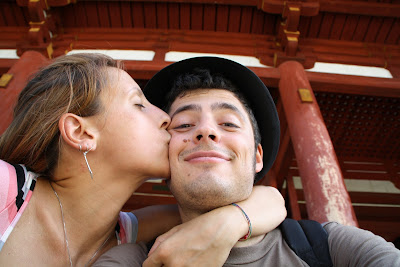 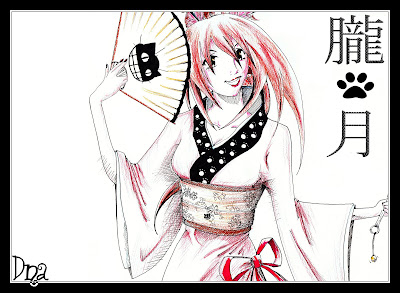 Sometimes
You make me so happy
Sometimes"